A free, flexible, and easy way to combine a contact form (or any form really) with a Postmatic subscribe checkbox is to use Caldera Forms. Here's how.

Have you ever wanted to add a checkbox to your contact form to let people subscribe to Postmatic while they are leaving you a note?

Or maybe create a widget which lets users subscribe to either posts (Postmatic) or digests (via Mailchimp)?

How about letting people subscribe to Postmatic when purchasing a t-shirt?

Caldera Forms is a plugin from CalderaWP which offers form creation via a simple drag and drop interface. We love Caldera Forms because it is free, GPL, and built for high extendability and flexibility. Anyone needing something more than a contact form but not wanting to pay yearly license fees should definitely check it out.

And add a lot of Postmatic.

Josh over at CalderaWP (also head developer of Epoch) cooked up an addon plugin which lets Caldera Forms talk to Postmatic. With it you can add a checkbox to any form that will trigger a Postmatic subscription request.

By combining Caldera Forms with Postmatic, you can easily create and customize forms for capturing new blog subscribers.

After you've got Postmatic for Caldera Forms installed and activated Postmatic will be registered as a new Processor.

The following directions assume that you have already created a form. Within Caldera Forms, open up one of your forms for editing. Click on the Processors option in the navigation menu. Next, click on the Add Processor button.

Click on the Use Processor button next to the Postmatic option. 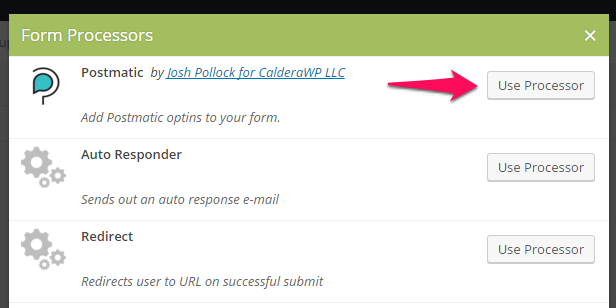 The  Form Processors box will close and a Postmatic Settings form will appear.

Fill in the boxes next to  Email Address, First Name, and Last Name. There are handy buttons to let you fill these fields with the corresponding data that you collect in your form - just click on the </> button to the right of each field to access a drop-down menu of options.

In the  Success Message field, you can create a custom message that will appear after someone has successfully subscribed. If you prefer, you can leave that field blank and a generic message will be used instead. 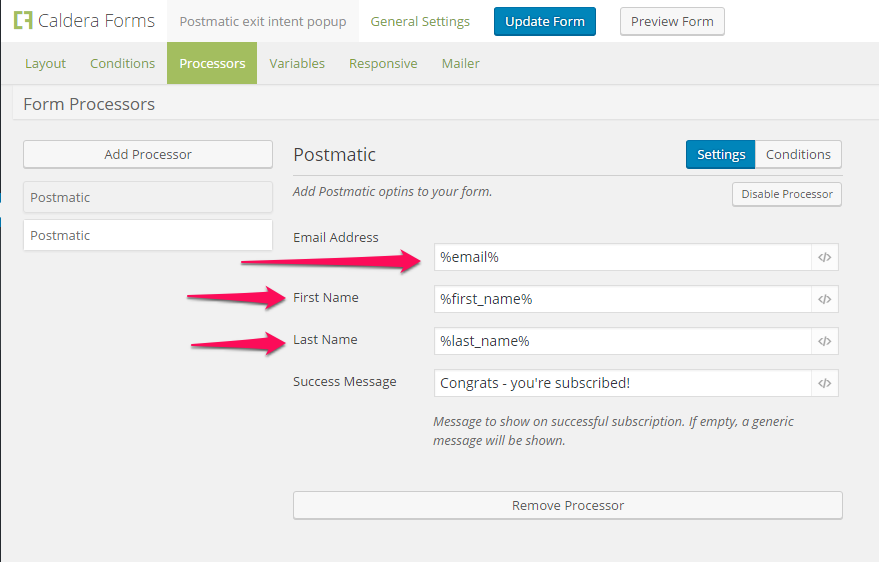 When finished, click on the blue Update Form button at the top of the page.

Processors can be triggered conditionally. You don't want anyone submitting your contact form to be subscribed via Postmatic... only the folks who want to be.

Click on the Conditions button on the Processors screen to configure the Processor to only run when a certain box is checked. 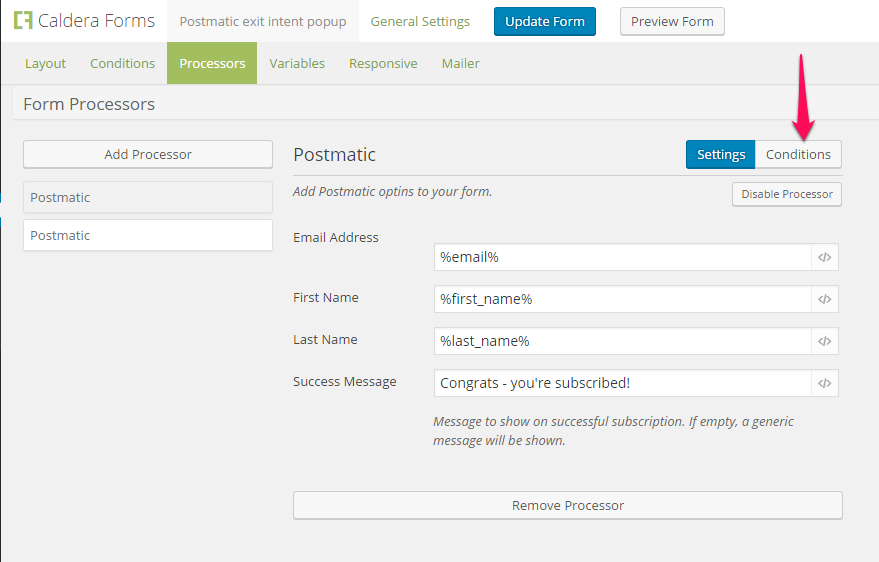 Select Use from the drop-down menu.

In the example blow, we are working with a form that has a name field, an email field, and a checkbox for users to confirm their interest in subscribing. Our goal is to subscribe only those who check off the box.

In the first drop-down menu, select the text accompanying the checkbox that asks if the user wants to subscribe.

In the second drop-down menu, select is.

In the third drop-down menu, select the text accompanying the checkbox that confirms the user's interest in subscribing.

When finished, click on the blue Update Form button at the top of the screen. You're all done!

The new checkbox on your form will send users the usual opt-in confirmation email from Postmatic. The Postmatic Processor runs in parallel with any other form processors so you can do things like use it on order forms, contact forms, widgets, surveys, etc. 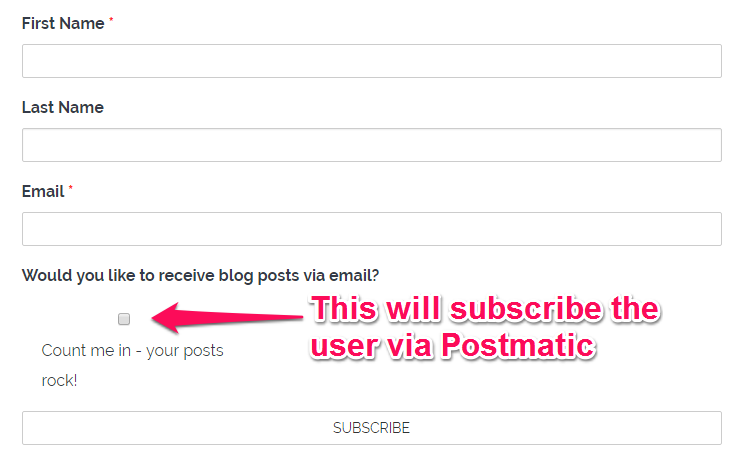 Enjoy the world of possibilities with this new integration. Thanks to the folks at CalderaWP for making it happen.